These two power points presented here represent the hard struggle of the female Lucknow embroiders in India who faced daunting challenges and abuse in the hands of middle men who exploited them, paid poorly and kept them in slavery to profit from their exquisite hand embroideries . A kind hearted lady took up their cause, organized them to cut out the middle men, built  well lit and decent workshops that were clean and modern where the women worked under vastly improved conditions.

Their beautiful embroidered products were then sold at auctions at very good prices and the benefits were given directly to the embroiders that greatly improved their well beings and income. For this, the lady was threatened with death by the middle men who did not want to give up their very lucrative business through dire exploitation so finally the Government of India provided the security she need to continue her laudable work.

The women who worked under dim lights in appalling conditions lost their eye sights the middle men did not care about but now they are given eye check ups and provided with prescription glasses so they work better and train young girls in the art of embroidery that they learned from their ancestors since the Mughal period.

Source : Google photo of female embroiders of Lucknow working under better conditions and helped by the NGO 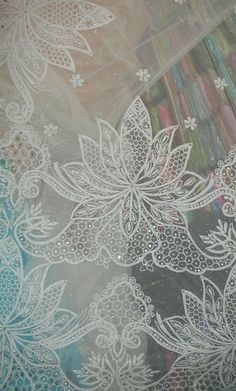 So watch these power points in two parts to see the wonderful work created by the women of Lucknow who carry on the centuries old traditions of  embriodery learned during the Mughal period in India known as chikan Karhi art. Chikan means shiny and karhi means art or craft.

Pride and strife of Lucknow embroiders  Part One

Link : Pride and strife of Lucknow embroiders  ( Part one )