Synopsis : This blog deals with the subject of toxic people who are all around us and shows how to identify them in order to avoid them. 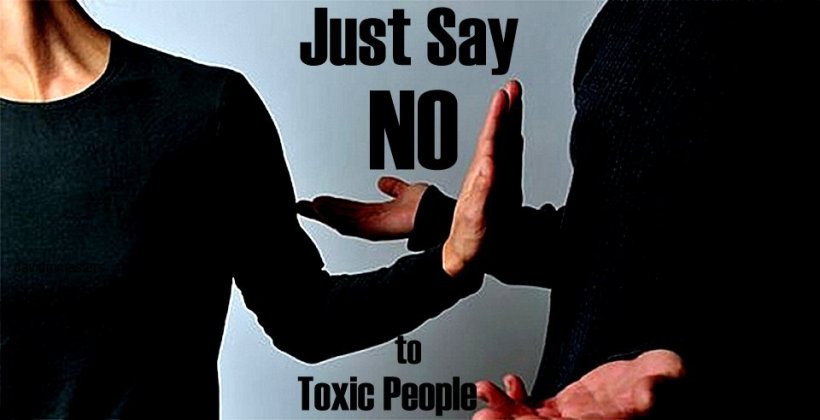 There was a fellow in my class in college who never talked to me or acknowledged me as his class mate although we were very few but he cornered me one evening downtown in a shopping center where I was buying a few things for our family.

He came out of nowhere and suddenly appeared. I was very surprised when he demanded 50 Rupees from me which was a lot of money in those days. He said that he was in dire need of some money but I said to him that I was just a student and did not have any money of my own to give but he still insisted to get any amount. He just did not take no for an answer so just to get rid of him I gave him 5 Rupees of my father’s money. Needless to say that he never returned the money and continued to ignore me in the class.

He graduated and left behind a mountain of debt because it turned out that he had this bad habit of borrowing money from any one he could but one day he disappeared and probably found a job somewhere. He was a toxic person whom people would rather never meet. He only left a bad impression as the user of other people. There are many such people almost everyone encounters in life.

There is another classic case of a toxic person so I will tell this story as well.

There was a young fellow who was the only son of a judge who was known as the hanging judge in England. His mother died of grief because she was so unhappy so the son decided that he will not become a lawyer or a judge and do something else. This did not sit well with his tough father who decided what was good for his son so he ordered the son to go back to his  estate in the countryside and think seriously about his future.

While the young man was staying in the estate house where the servants took good care of him, he received a letter from one of his classmates whom he did not know at all saying that he will visit him soon and arrived one day uninvited.

Their relationship was frosty because they were not friends but out of politeness, the young man accepted him and did what he could to make him comfortable. This unwanted guest then started demanding total attention all the time which he could not give and one day told him to occupy himself as he had other things to do. He had met a beautiful girl in the church and found that she was attracted to him so he started paying courts and often went to meet with her in the village.

The guest then secretly followed him one day to find out where he goes and found out that they were sitting under a tree and talking so he wrote an anonymous letter to that beautiful girl saying the son of the judge was a vile person among other things. The result was that the girl found herself very disturbed and finally broke off the budding relationship.

The young man was heartbroken just like the girl and went back to London to his morose life and bleak future. This is the classic example of a very toxic person who deliberately destroyed a beautiful relationship out of spite.

You have I am sure met many toxic people in your life who never become your friend or who  pretend to be your friend and do harm in many ways. It seems that they are everywhere. They are in your school, they are in your community, they are in your office and in your social circles. They can be overbearing, demanding, impolite, extremely narcissistic, selfish and jealous type of people who always think that it is their right to use people for their own selfish reasons.

If they are your office mates, they will show their true colors by demanding favors from you all the time and if refused will turn against you. They look over your shoulder to see what you are doing. They chat ceaselessly to disturb you while you are deep in thoughts about the projects you are planning or writing about and they gossip. This is probably the best indicator of a toxic person.

If you decline their invitation to go night clubbing and drinking in disreputable bars then they take it as an affront and will gossip about you in the office. There is no getting away from such people who are born to make other people unhappy.

At a younger age, you will find them in your school. They may be boys or girls who tend to always demand your attention, your time, your homework, your money or use your cell phone. If you walk away from them because you understand their true nature then they will spread false rumors about you. Now with the spread of Facebook and other such social media, it is easy to publish anything including compromising photos that have been photo shopped to embarrass someone.

They tend to be bullies who pick on students who are smart, belong to a minority group or of ethnic descent. This may be racially motivated but it could be simply because you are smarter than them and always at the top of the class so they are jealous of your achievements. I have seen this among girls in high school who form their own gang and behave badly toward sweet girls who only want friendship but not at any cost.

Later in life when you are working in an office, you will meet the same kind of toxic people. I knew a fellow who could not accept that I was doing an excellent job as a research agronomist and was being acclaimed as such so he started spreading the idea that I was probably falsifying my research data to look good. People who knew how hard I had to work to make my projects successful were very supportive of me but I have met many such toxic people in many countries.

What I have learned from my experience is that it is always good to leave such people behind and get on with your life. I have never accepted such people and always told them sometimes very bluntly that their methods are repugnant.

There are all kinds of people in life. Some are truly great people who will value your friendship while others will try to use you. They are the kind of people one must learn to avoid. As children we are naturally more tolerant because we at a young age do not fully understand the evil nature of others and have an inherent desire to trust everyone.

But as we grow older, we learn to be choosier and try to associate with people of similar interest and similar background. In any community you will find people who will impose on you and demand favors that you can’t often deny them. They will use the pretense of friendship but they are not your friends because real friends do not use anyone or take a person for granted.

If you are lucky, you will meet good people who will help you without any preconditions and very selflessly. Such people are rare and hard to find but will come forward  because they see in you a hard-working honest person who needs a little help. I have met a few such people who became my mentors. The head of our Chemistry department in college recommended me for a loan scholarship without the slightest hesitation and signed the documents when I approached him.

Another professor who was the head of our agronomy department signed my application for a passport as a guarantor also without hesitation although it could be risky for him to do so. But these good people believed in me and knew that I will never let them down.

How does anyone get to know a person and his character well enough to trust him? You may have noticed that in a class or in an office, you can be noticed if you work hard at the task given to you and produce excellent results often working overtime and doing more than what is normally required of you. So this trust is gradually earned.

I earned this trust in Algeria of our director and deputy director of the agricultural office where I worked by going to the field at 6 am in freezing winter to do the job assigned to me. They sent me gas coupons for my motorbike and urged me to stuff newspaper into my leather jacket to ward off chill of winter. They asked me to stay but I had to leave Algeria.

But the toxic people I am writing about are also noticed in any workplace or community where they are avoided by others. Nobody wants to be used by others or taken advantage of by anyone but there is always a first time. If you  have come across such people in your life then I am sure you know how to deal with them but children are innocent so they do not know how to deal with them.

The movie Forrest Gump is very interesting where the child with polio and wearing braces to walk learned to run and away from bullies. He later became a war hero during the Vietnam War and received the Congressional Medal of Honor but not everyone can run away so what do you teach your children? How do you teach them how to identify toxic people and stay away from them?

This is where your experience in life can come in handy. Teach them never to be afraid of bullies and users. Teach them to be kind and helpful to those who need but flatly refuse to have anything to do with the toxic people. This will strengthen their resolve and they will develop a strong character. To learn to say No is a good thing. I know I got off easily by parting with only 5 Rupees because it could have been worse. The point is that one should never accept to be used by others.

There is a wonderful video that talks about how to identify and deal with toxic people so watch it here.