One of the famous artists of India is Raja Ravi Varma who is well-known to the world. His dazzling style and color, use of middle class Indian women for his paintings and his depiction of religious figures of  Radha and Krishna puts him in a category all by itself.

Raja Ravi Varma (29 April 1848 – 2 October 1906) was a celebrated Indian Malayali painter and artist. He is considered among the greatest painters in the history of Indian art for a number of aesthetic and broader social reasons.

Firstly, his works are held to be among the best examples of the fusion of European techniques with a purely Indian sensibility. While continuing the tradition and aesthetics of Indian art, his paintings employed the latest European academic art techniques of the day. Secondly, he was notable for making affordable lithographs of his paintings available to the public, which greatly enhanced his reach and influence as a painter and public figure.

Indeed, his lithographs increased the involvement of common people with fine arts and defined artistic tastes among common people for several decades. In particular, his depictions of Hindu deities and episodes from the epics and Puranas have received profound acceptance from the public and are found, often as objects of worship, across the length and breadth of India. ( Source : Wikipedia)

Raja Ravi Varma was born M. R. Ry. Ravi Varma, Koil Thampuran of Kilimanoor at Kilimanoor palace in the erstwhile princely state of Travancore (present-day Kerala) into an aristocratic family that for over 200 years produced consorts for the princesses of the matrilineal Travancore royal family. The title Raja was conferred as a personal title by the Viceroy and Governor-General of India. 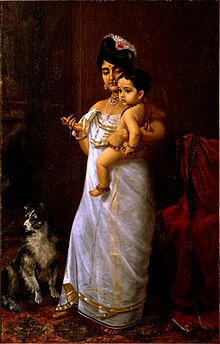 This is a painting by Raja Ravi Varma of his daughter Mahaprabha and her son.

I have put together his most notable paintings in the power point below for your enjoyment. This painting known as The lady with the lamp was wrongly attributed to Raja Ravi Varma and it was actually painted by another very good artist called H.R.Haldankar with the title Glow of hope. The painting above is a remarkable copy of the original done by an unknown artist in Kerala . It is painted on a bamboo screen and is very impressive so I bought it in a small town during our trip through South India.

I have included the original painting in the powerpoint with the note that Raja Ravi Varma was not the artist of that particular painting. He painted Mona Lisa copying from the original so it is included as well because of its quality and resemblance.

One thought on “Raja Ravi Varma”