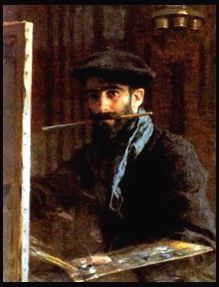 Source : Google photo of a self portrait of Etienne Dinet

One of the most wonderful artists of his period, Etienne Dinet loved to paint the common people of North Africa especially in Algeria where he spent most of his life.

Nasreddine Dinet (born as Alphonse-Étienne Dinet on 28 March 1861 – 24 December 1929, Paris) was a French orientalist painter and was one of the founders of the Société des Peintres Orientalistes [Society for French Orientalist Painters]. He became so enchanted with North Africa and its culture that he converted to Islam, and was proficient in Arabic. In addition to his paintings, he translated Arabic literature into French. ( Wikipedia )

Born in Paris, Alphonse-Étienne Dinet, was the son of a prominent French judge, Philippe Léon Dinet and Marie Odile Boucher.  In 1865 his sister Jeanne, who would be his biographer, was born.

His art was so radically different from his contemporaries in Europe that they at first failed to appreciate his style of painting real life people without posing for him and discouraged the art galleries to display his paintings. The European artists at that time had a posed and unnatural style they could not get away from and thought it was the best way of painting their subject.

Etienne Dinet converted to Islam and took the name of Nasreddine Dinet , became a well known artist and a great scholar of Arabic that he spoke fluently and translated into Arabic many scholarly treaties, books and literature found in Europe and vice versa.

His nude models were real life women in rural Algeria who voluntarily posed for him and appreciated his beautiful portrayal of Arab and Berber women in all their glory. They were not veiled and nudity in women was not unusual in the countryside where Etienne painted most of his subjects. His paintings have a vibrancy that shows the real emotions in his subjects , piety of Moslems, daily life of children, women bathing or playing, rural scenes, landscapes, desert bedouines, camel caravans and numerous other aspects of Moslem culture. He used the colors to depict the natural colors of his subjects. 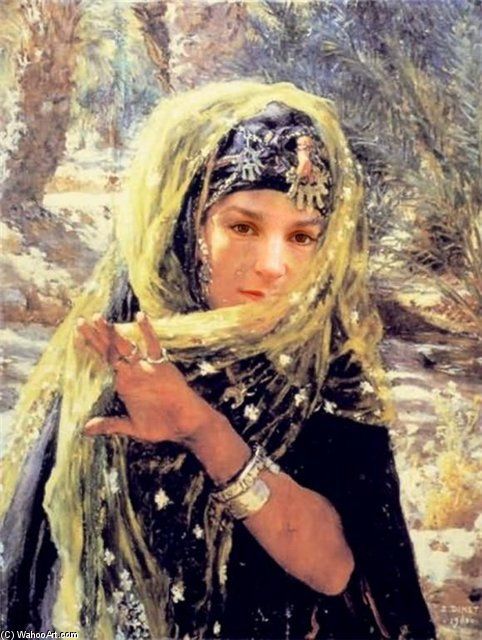 Dinet made his first trip to Bou Saâda by the Ouled Naïl Range in southern Algeria in 1884, with a team of entomologists. The following year he made a second trip on a government scholarship, this time to Laghouat.[1] At that time he painted his first two Algerian pictures: les Terrasses de Laghouat and l’Oued M’Sila après l’orage.

He won the silver medal for painting at the Exposition Universelle in 1889, and in the same year founded the Société Nationale des Beaux-Arts along with Meissonier, Puvis de Chavannes, Rodin, Carolus-Duran and Charles Cottet. In 1887 he further founded with Léonce Bénédite, director of the Musée du Luxembourg, the Société des Peintres Orientalistes Français.[3]

In 1903 he bought a house in Bou Saâda and spent three quarters of each year there.[1] Dinet became so enchanted with North Africa and its culture, that he eventually converted to Islam. [4] He announced his conversion to Islam in a private letter of 1908, and completed his formal conversion in 1913, upon which he changed his name to Nasr’Eddine Dinet.[5][6] In 1929 he and his wife undertook the Hajj to Mecca.[5] In July 1896, he was named Chevalier of the Legion of Honour and participated in the international exhibition of the Centenary of Lithography (Paris).[7] The respect he earned from the natives of Algeria was reflected by the 5,000 who attended his funeral on 12 January 1930 in Bou Saâda.[5] There he was eulogized by the former Governor General of Algeria Maurice Viollet   ( wikipedia)

Source : Google photo of the grave of Nasreddine Dinet in Bou Saada, Algeria next to his friend .

Now a magnificent museum in Bou Saada in Algeria has been built to preserve his most renowned artworks .

Here I present a power point of his most well known paintings for your enjoyment. You will not fail to notice the extraordinary quality of his paintings , the details and the play of light and shadows on his subjects that has set him apart from the rest as the master artist of his time. This powerpoint is for your enhancement of knowledge so please feel free to share it with anyone you like in any social media.

Note : My blogs are also available in French, Spanish, German and Japanese languages at the following links as well as my biography: