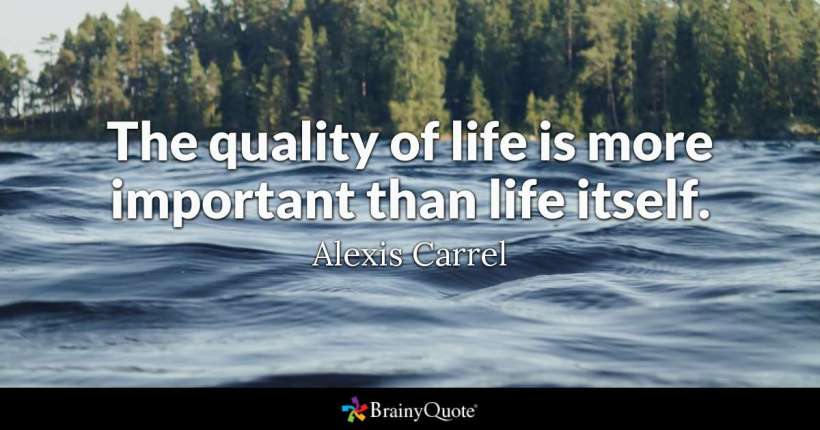 Synopsis : In the struggle for our daily existence we often overlook the quality of our life and opt for frivolous and vanity enhancing clothes and gadgets that impress no one. If we learn to give up our bad habits and live simply, it adds to the quality of life that we all aspire for . It is not hard to do.

There is a place in Rome called the thieve’s market where you can buy clothes and a variety of things at very low prices. It is also a place where thieves have a field day giving some justification to its ill repute. One day I wandered over to the market which is just near the river to see what type of things they sold and was amazed that a sheep wool jacket sold for only 5 dollars when the new price in New Zealand or Australia was over 200 dollars.  I did not buy the jacket because I did not need it but I could understand if very poor people shivering in the bitter cold would be tempted to get it at that price even they could afford. 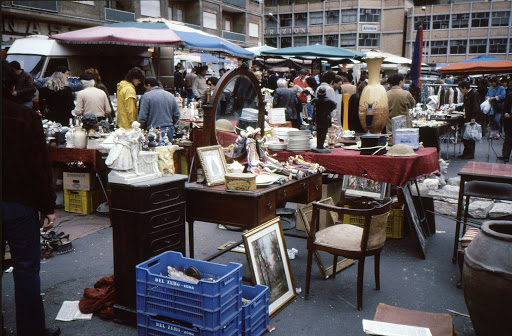 There were old LP records, books, rusty old sewing machines, bicycles etc. and thousand more things for sale for a  bargain price because the trick was to bring the price down some more while keeping your hands in your pockets holding on to your wallet because the thieves were always breathing down your neck so to speak . I was lucky that I lost nothing there except my innocence but  an American tourist was not so lucky.

He was carrying a huge backpack where he had kept his camera that the thieves took out without the fellow knowing anything but I blame the idiotic tourists who invite such thievery in a very public place known for its vagabonds who loiter there looking for an opportunity. 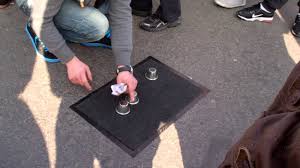 Source : Google photo of the con artists with the three cups trick

Not to be outdone, there are the crooks who specialize in emptying your wallet rapidly by imploring you to place your bets on where they put the pea under a cup which they rapidly move on to the next cup as soon you place your bet and lose your money. You will see them everywhere in Rome milking the unsuspecting people because they have been at this game for a very long time and make a good amount of money everyday. 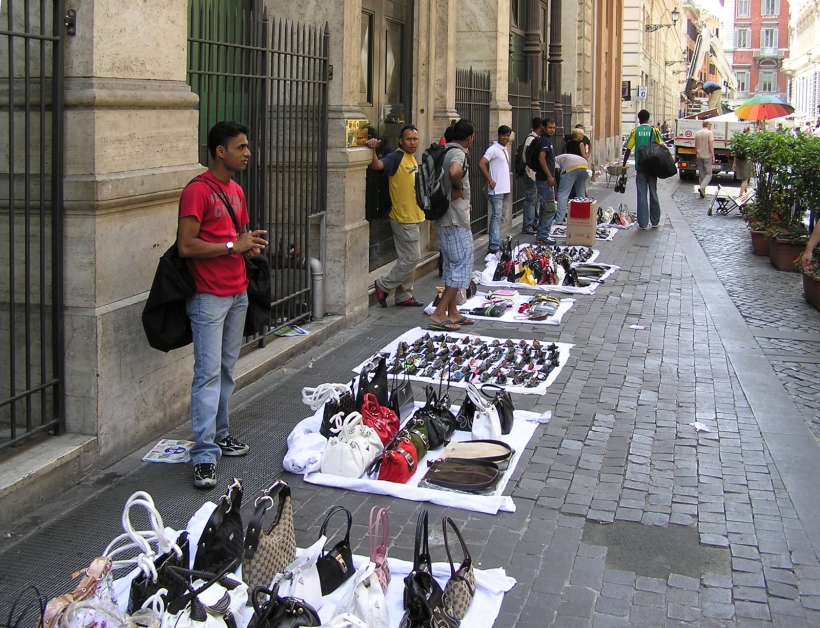 Source : Google photo of street vendors in Rome who excel as con artists

Then there are those vendors who will try to sell you Rayban sunglasses for 5 dollars or Rolex watch for 10 . If nothing works then they pull out of their coat cheap slides or a wide variety of things to entice you with but run like crazy when the policemen show up.

There is now a worldwide trade of used clothes that some people collect somewhere to be shipped to countries where people are very poor and do not have enough to cover themselves decently . There is always a war going on somewhere or people suffer from natural calamities so they are given the used clothes as a charity but more often than not these bales of dirty used clothes end up in the hands of unscrupulous dealers who ship them to countries other than the destination . Some end up in the thieve’s market in Rome as well . 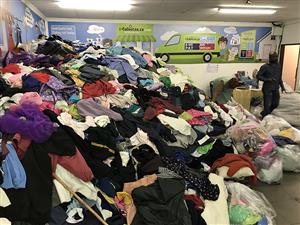 Here in the Philippines the used clothes are called Ukay Ukay where you can buy them very cheaply so it is quite popular with the very poor people who can’t afford more expensive clothes sold in Malls or upscale stores selling designer clothes. I have seen this trade in many countries because there is a demand for it. Often these clothes are taken off the dead people or people who had infectious disease so you will never know where it came from.

I saw a store in California called Salvation Army store where they sold clothes and suitcases , shoes etc. for a very low price  that poor people often buy so there is a market worldwide that is supplied by crooks who take the donated clothes and sell them albeit at a low price. Then there are stores called Factory surplus stores where they sell new clothes but at a price you can afford so I have bought some myself.

The problem is the quality of life that is under serious threat everywhere so everybody tries to get food, clothing and shelter at a price they can afford because it is called the necessity of life that no one can do without.

We need to look well dressed , well fed and well sheltered but high quality food, clothes and shelter are reserved for the lucky few who can afford them. The glittering Malls are full of designer clothes, expensive watches and 50 dollar lipsticks but they don’t sell very much judging from the lack of customers and bored well dressed salesgirls who are eager to make eye contact with you. The vast majority of the people just pass by because they are looking for something they can afford.

There are some who always brag about their designer clothes and I- pads but they are self conceited and vain. I used to wear a Tissot watch that I paid 200 dollars for and lost it to the thieves so now I have a watch that costs only 3 dollars and gives good time. The cheap watches are thief proof as well.

The point is that you can now buy new clothes, watches, shoes, underwear and all you need without breaking the bank so you do not have to buy Ukay Ukay because buying second hand clothes can be risky since you do not know the provenance. The mass production of everything you need floods the market everywhere so anyone can buy them. If you buy a good looking watch for only 3 dollars including the battery then you wonder at what price it was made somewhere in an automated factory and ended up on your wrist passing through several agents who took their share, the cost of shipment and various other charges and still made some money.

May be it was made for only a dollar by a factory somewhere in China that included the cost of material to make it and the labor cost so how anyone could make money ? It is called the economy of mass production the same way almost everything in the market is mass produced somewhere. The clothes are mass produced in over crowded factories and by poorly paid workers in Bangladesh or Cambodia and shipped to every corner of the world thanks to free trade agreements and container shipping that has revolutionized the trade.

But the same containers are used by very bad people who ship garbage from one country to another and dump it somewhere near you because someone takes money to do so and ignores the health hazards posed by infectious hospital wastes and contaminated waste that they do not want in their own country so they pay some corrupt people to dump in theirs. Without knowing we the common people become the victims.

This sort of crime that happens almost everyday deteriorates our quality of life. I have written a great deal about how very bad people adulterate food that we eat so that they can make more profit. They do not stop there. People have found out that big trucks that carry food from one part of the country to the next often do not return empty to their base and will carry garbage for a fee. Do they clean and thoroughly wash their trucks before they load up food there ? Is there a law prohibiting the food trucks for carrying things that are not food? I don’t know.

We fight to breathe fresh air but get our lungs full of poisonous black smoke from the exhaust of cars, buses and rickety public transport . We inhale the second hand smoke  from people smoking in public places and we eat adulterated food that may contain carcinogenic chemicals. We can’t  trust the river water that is polluted and we can”t even trust the city water that comes through our taps anymore. Remember Flint, Michigan? 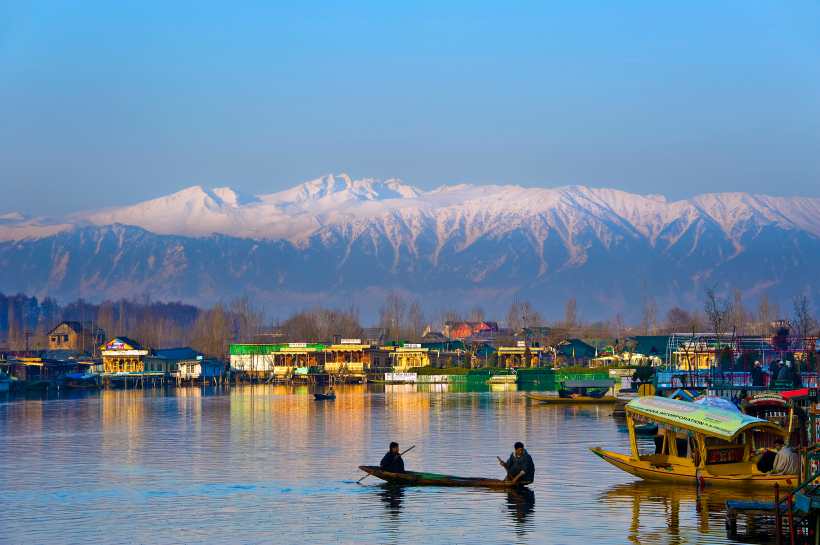 Source : Google photo of snowy peaks of Himalayas from Sri Nagar in Kashmir

The Mother Nature cleans up the air and water if we stop polluting. For the first time the Ganga water is so clean that you can drink from it and you can see the snowy peaks of Himalayas from Saharanpur for the first time because the air is now so clean and pure. But we do not need a Corona Virus to stop the whole country so that the Mother Nature can clean up the mess we make everyday, pollute our air, our water and the land.

It will be nice if the water of Ganga remains pure and the snowy peaks of Himalayas are always visible but I know that it will not last long. We will start polluting our world as soon as the lock down is lifted and the thieves will be busy again in the Thieve’s market in Rome and elsewhere.

To improve our quality of life we must all join hands and make it possible. Learn from the Dutch people who prefer riding their bicycles to keep their cities pollution free. Organize massive tree planting days everywhere. Quit smoking. Quit spitting on the street or throwing garbage everywhere. It is the total effort by everyone that can improve our quality of life but I also know that dirty habits die hard unless people are punished like in Singapore.

I know that a simple living but eating quality food is better than the vanity of showing off designer clothes and fancy and expensive watches or Gucci shoes because no one really cares or looks at you. A three dollar watch gives the same time as a Rolex and clean factory surplus clothes can cover you decently anytime.

So the focus should not be on vanity but on clean living , simple living and remaining in good health but that will require giving up a lot of bad habits like smoking, drinking, gambling, wasting money on things that do not improve your quality of life like eating junk food laced with carcinogenic preservatives.

Most of all you must be happy the way you are. If you are happy and contented in your life then it will definitely add to the quality of your life because it is your inner happiness that matters and nothing else.

Note : My blogs are also available in French, Spanish, German and Japanese languages at the following links as well as my biography. My blogs can be shared by anyone anytime in any social media.

2 thoughts on “Quality of life”